I did a system restore and that did nothing so then I tried to do a re-install and again confusion ruled… Frustrated, I ended up taking my Laptop back to Staples and they re-installed Windows for me. I talked to the tech about the re-Install and then when I went back home and checked my manual, sure enough…there it was in black and white exactly as he said… I just never saw it, or I saw it, but it never registered in my brain. 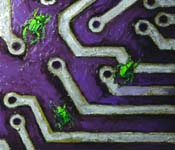 re-install the programs I wanted. First I installed my PC security and my Zone Alarm firewall and then downloaded my browsers, Opera and Firefox. Next I started to install my other programs and that's when I started to have glitches and my computer started to slow down. My Spyware Doctor was giving me different error messages. I tried to update but couldn't even though my account was valid. I reinstalled it and it was still the same. I ran my other security software and they showed nothing. Finally I ran SpyBot Search and Destroy and it found 8 bugs that it removed. My computer was alive again and I decided to uninstall and remove Spyware Doctor as it wasn't working properly and I felt it was the reason I was having the problems.

Things ran smooth for a while but I kept getting messages from Zone Alarm that Spyware Doctor was either trying to send a message or was trying to input my computer. I checked to see if I had uninstalled it and it was gone from my program list. I did a check through Zone Alarm and to my surprise, Spyware Doctor was everywhere. I found at least 25 different entries for Spyware Doctor to different functions in my computer. I'd say that it took up 25% of the entries and the other 75% was used by Microsoft and all the other programs I was running. I deleted all of the Spyware Doctor entries and I also put a block on Borland that I found was linked to Spyware Doctor and that I had not installed. Since then, Zone Alarm has been quiet and my computer is humming along nicely. I knew Norton was bad for adding its unrequested "services" but I never knew that Spyware Doctor was just as bad until I had to do a re-install. I'm not even going to bother with it if that is how it works. The next thing I did was to do a back up of any new files and my bookmarks. Now the only thing I have left to do is to re-do the section of my book that I lost…

Well I don't know what all this means but my charger for my cell phone short circuited on the weekend and is toast. My scanner didn't load up this time and now my Computer remote speaker system is also acting up today and I think it's toasted too.. Seems like everything electrical that I own is being affected…. Everything else in the house is working… Ahhhh! I stopped… there have been some interesting things happening with the heat, as some rooms are cold… and then they are warm…. There are Spirits around… Marian says that they are her parents and her uncle and I agree.. Now just why they are here is another thing and one that I haven't got into ….yet..